This past weekend I had the pleasure of attending the New Jersey SCBWI Conference – listening, learning and interacting with so many wonderful people, not the least of which 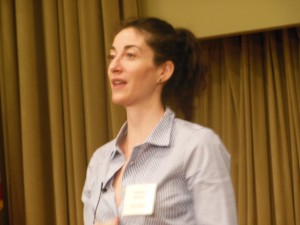 was Lauren Oliver! For those who don’t know, Lauren is the New York Times and internationally bestselling author of Before I Fall, and the Delirium series, both of which have been optioned for film. She is also the author of two books for younger readers, Liesl and Po, a finalist in the 2012 E.B. White Read Aloud Awards, and The Spindlers. Despite the fact that she was recovering from the summer flu, Lauren managed to drag her humble bones to our conference and give an inspiring closing speech, as well as, sit for a long book signing. Paraphrasing from Lauren’s speech, here are just a few of the things we learned about her.

First off, her love of reading and writing began early. Her parents were both literature professors and greatly encouraged her in these endeavors. In fact, she loved reading so much that when she finished a book she would often continue writing the story. Nowadays, we would call this fan fiction. For this reason, to this day, she still likes open endings to books (sometimes much to the chagrin of her editors!) 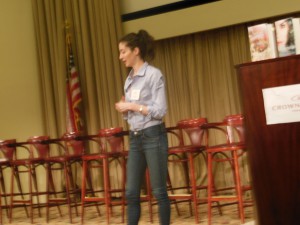 Lauren also told us that in her household, the line between what was real and what was imagined was blurred and her family would have discussions at the dinner table that reflected this. In other words, they encouraged her imagination and story-telling mind. Her father, who is also a writer, taught her one of the most important things about writing – write every day. She was humble enough to admit that writing is hard work, even for her, and that it “never gets any easier”. Lauren said, “Writing every day helps you build up a tolerance for it”, and then she jokingly added, “kind of like drinking every day.” Lauren also admitted that in the beginning of her writing career she struggled with plotting. Obviously, she’s overcome that obstacle because her plotting is now brilliant 🙂

Lauren also discussed how she now thinks the best way to tackle trilogies is to write all three at once. If you don’t, by the time you get to the third book you may realize that you might have made different choices with the first book. She treated the audience to the very first reading from her new project, Panic, which is set to be released in Spring of 2014. What a great sneak peek that was! 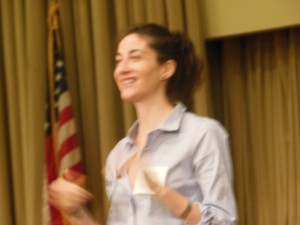 During the Q&A, Lauren mentioned that she often employs a three act plot structure, feels books on screenwriting could be very helpful for novel writers, and says printing out and reading her material helps her to edit and revise better than trying to do it on screen. She tackles a word count of a thousand words a day if she’s working on one project. Right now, she’s working on three simultaneously, so she’s writing 750/500/500 respectively on those.

All in all, Lauren’s speech was informative, inspiring and humble. I came away from the whole experience hoping that some of her brilliance might’ve rubbed off on me (but not her flu germs!)

So, if you’ve read any of Lauren’s books, do you love them as much as I do? And if you haven’t read any of her books, come out of your cave and get thee to a bookstore immediately!