WOOT! There’s a Goodreads giveaway for JOURNEY BEYOND THE BURROW (HarperCollins) by Rina Heisel! This is the first book I ever sold as an agent and it comes out on July 13th, 2021! I’m so excited to see this classic, heart-warming tale out in the world! 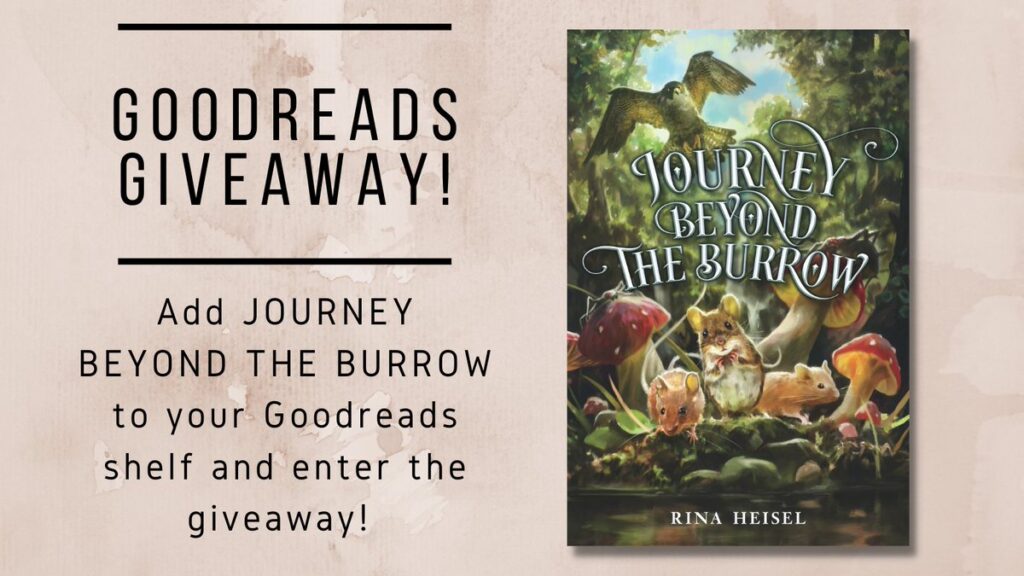 Enter now thru 4/12/21 to win 1 of 5 copies by clicking this link: GOODREADS GIVEAWAY

Here’s the blurb about the book:

With the adventure of Avi’s Poppy series and the heart of A Wolf Called Wander, this charming and exciting middle grade adventure follows one mouse’s journey to save his baby brother from a sinister evil.

There are rules every mouse must follow if they’re to survive in the forest.

Tobin knows these guidelines by heart. After all, with one younger sibling, another on the way, and a best friend with a penchant for trouble-making, he needs to be prepared for anything.

But one stormy night, Tobin’s safe burrow is invaded by monstrous arachnids, and his baby brother stolen away. To save him, Tobin will have to do something he’s never done before: break the rules.

Drawing inspiration from the author’s work as a natural science documentarian, Journey Beyond the Burrow is as alive as the forest floor, where nature is unpredictable, occasionally frightening, and inspirational all the same.

You can pre-order JOURNEY BEYOND THE BURROW on all major retailers through this link: HarperCollins – Journey Beyond the Burrow! 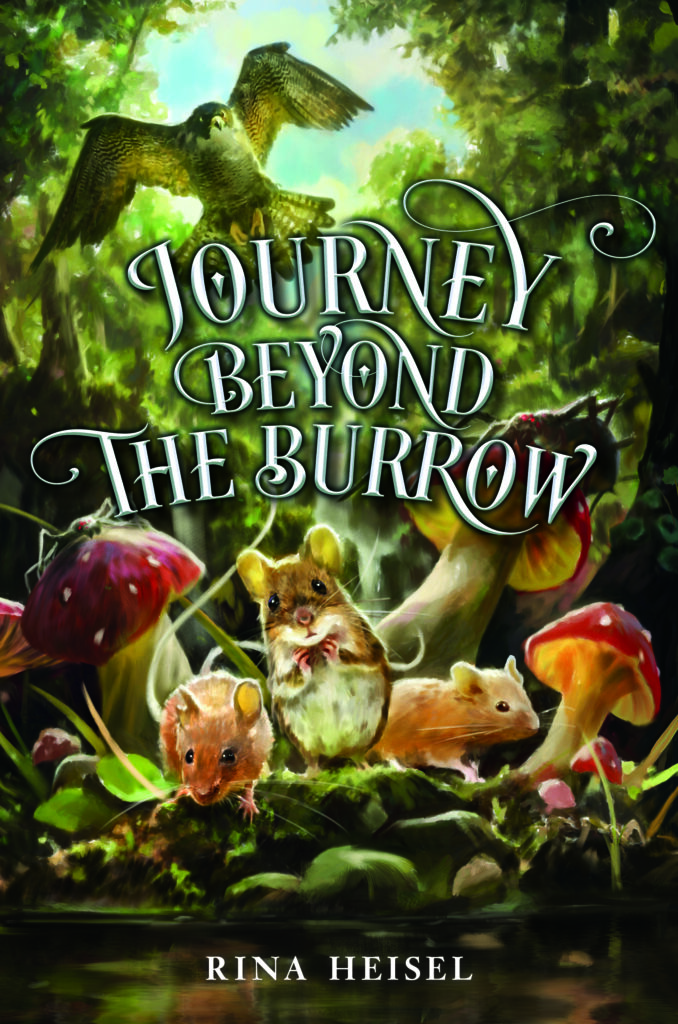 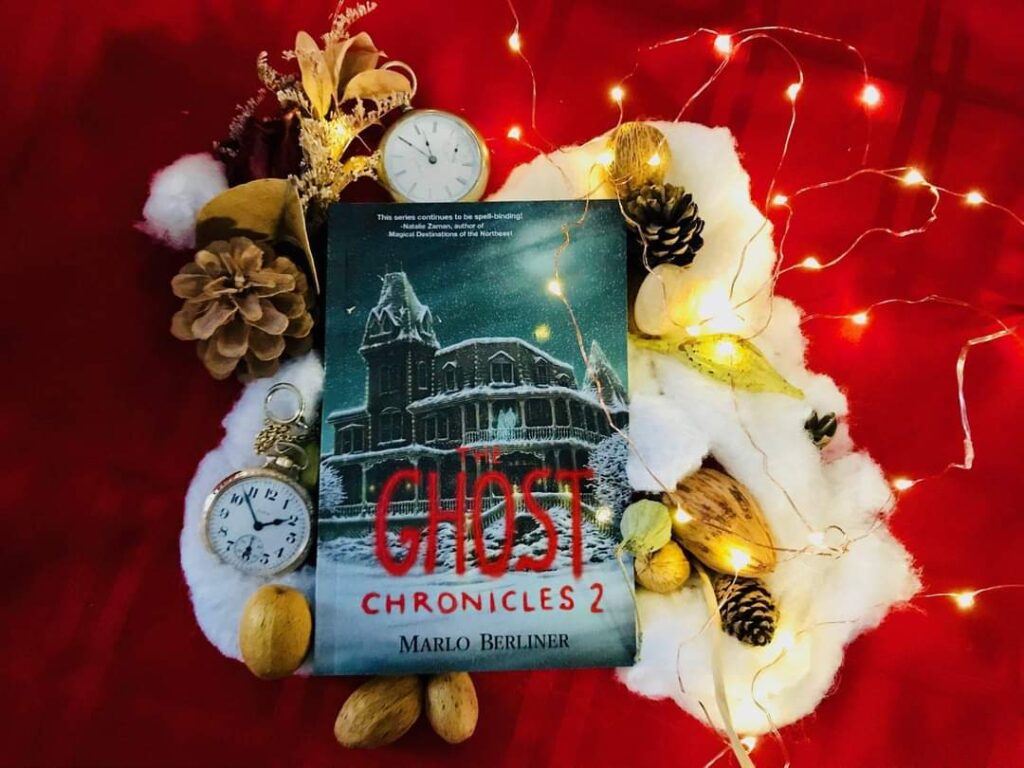 Enter to win an e-book bundle of all 31 books featured in the Indie Authors’ Bookish Event! 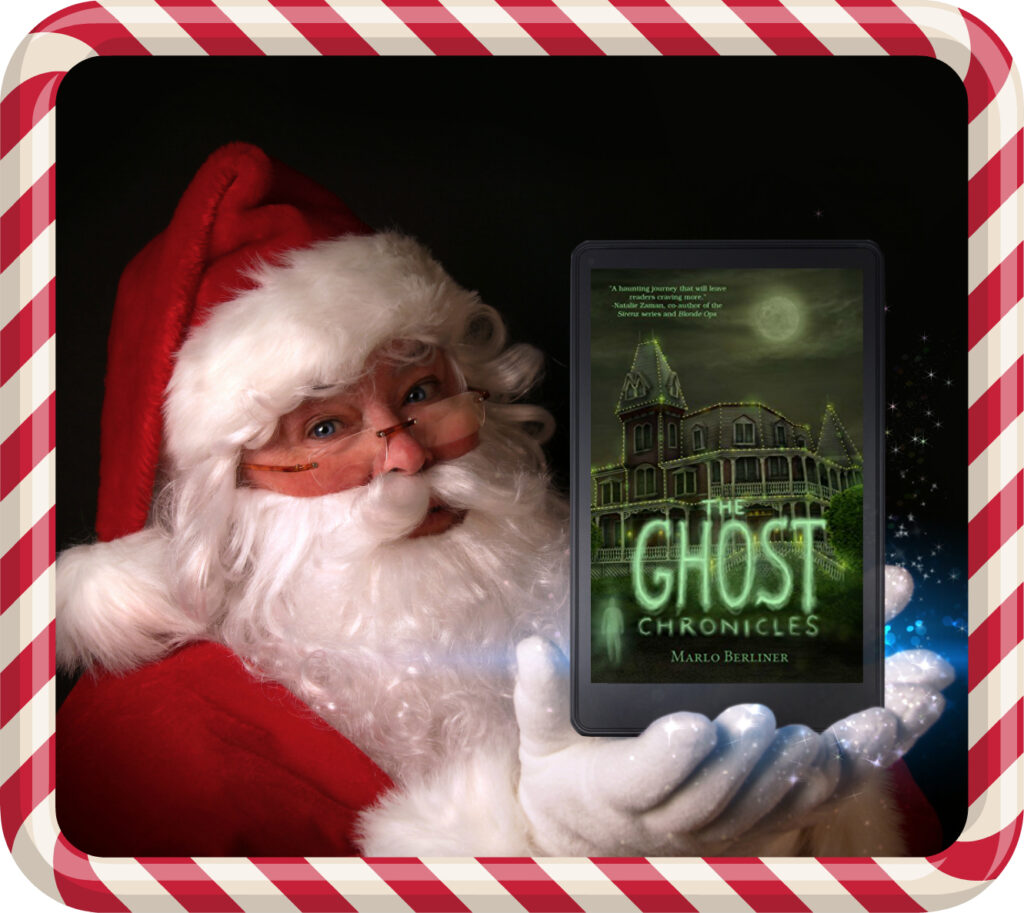 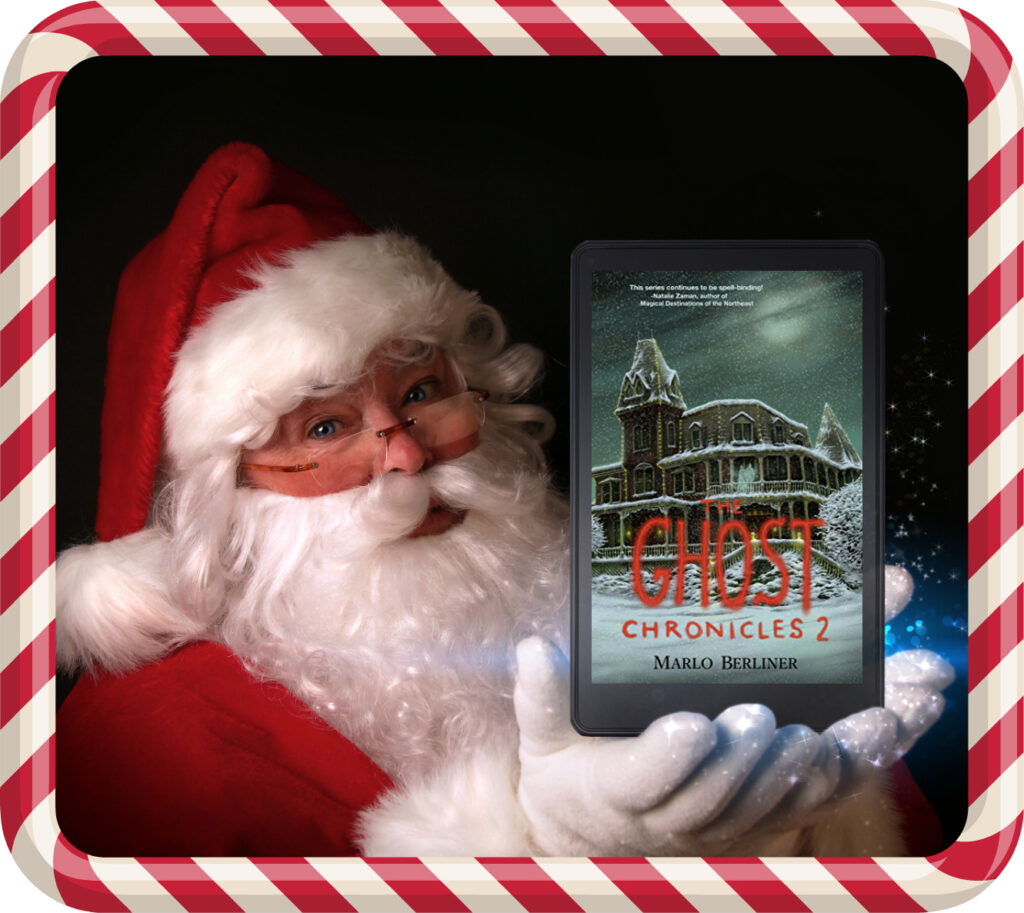 Woot! I’m super pleased to announce that THE GHOST CHRONICLES has garnered another accolade and been named Runner-up in the 2018 Kindle Book Review Reader’s Choice Awards! 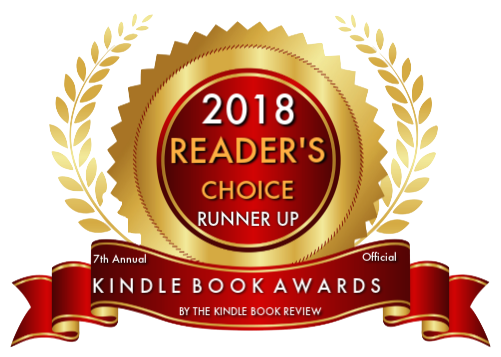 And one more bit of good news…THE GHOST CHRONICLES 2 has been awarded GOLD in the Literary Classics Book Awards for YA Paranormal! 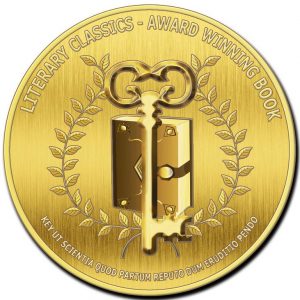 If you haven’t started the series, now is the perfect time! Amazon has put the paperback version of Book One on sale for more than 26% off, and Barnes & Noble has it at 10% off! I’m not sure how long these sales will last, so take advantage while you can!

Look for THE GHOST CHRONICLES 3 to be out in 2019! More news on that soon!

…ME!!! I’m thrilled to announce that I am now an Associate Agent with the Jennifer De Chiara Literary Agency in NY!!!

Don’t worry though! I’m still an author, so I’m continuing to write and freelance edit, as well. But this is something I’ve been working toward for a very long time and it’s a dream come true! All the details about what kind of books I’ll be representing are on the JDLit Agency website here: https://www.jdlit.com/marloberliner

And if you could help me spread the word among the writing community by sharing one of the tweets about the announcement, I’d be ever so grateful!

Who better to advocate for writers than someone who has been in the trenches herself? I’m looking forward to helping make dreams come true for some worthy writers 🙂 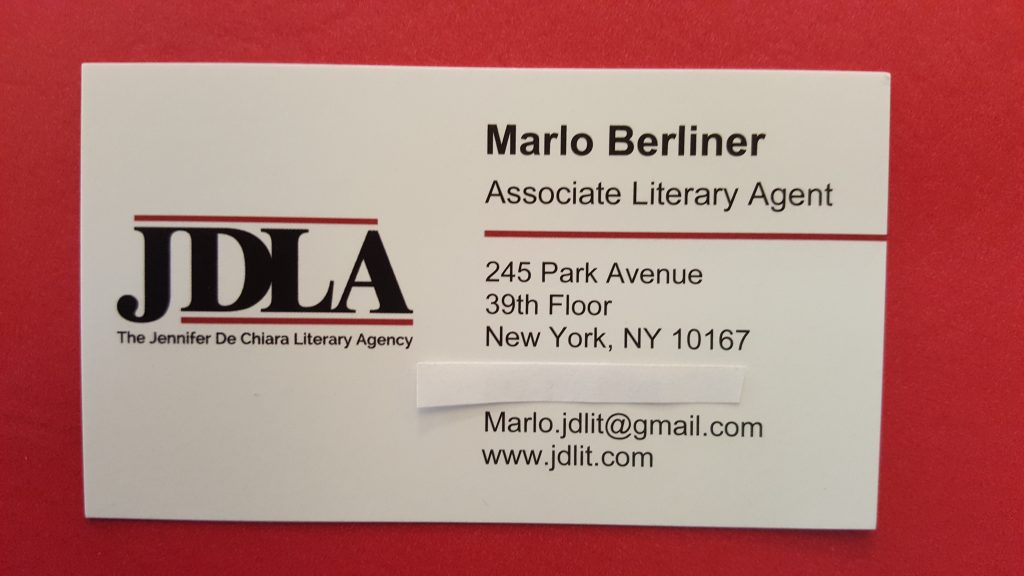 As many of you know, the setting for most of my best-selling series, THE GHOST CHRONICLES, was inspired by the Angel of the Sea, an award-winning bed and breakfast in Cape May, NJ that I visited several years ago. This spectacular inn has been featured on several television programs and in magazines throughout the world. Most notably, it was chosen by Oprah Winfrey as one of the “Best Vacations in the World” and included in her television talk show. The Angel of the Sea is also one of the most recognized Victorian structures in the United States. Legend has it that in the late 1960’s, a girl fell to her death at the Angel of the Sea and did at one time, haunt the inn. The story of the girl has been included in several non-fiction books about ghosts in Cape May. My heroine in THE GHOST CHRONICLES, Sarah McConnell, was inspired by this legend. If you’d like to learn more about the legend of the haunting at the Angel of the Sea, you can read all about in this blog post: How She Died.

The Angel of the Sea bed and breakfast is as beautiful and romantic and haunting as I portray it in THE GHOST CHRONICLES series and I’ve truly fallen in love with the place and its rich history. As I write this, I’m working on the third and final book in the trilogy.

Since we’re heading into Fall and Halloween season, I thought I’d do a post about one interesting by-product that has come out of the publication of THE GHOST CHRONICLES books – everyone tells me their ghost stories! It doesn’t matter whether I’m signing at the Angel of the Sea or a Barnes and Noble store, everyone wants to tell me their ghost story. What’s been fascinating for me is finding out that people from all walks of life have a ghost story to tell. Even stranger still, is the fact that there are many, many similarities among the stories. When they’re telling me their stories, people have no way of knowing I’ve heard something similar before, but it’s something I’ve definitely been noticing. Basically, I hear the same stories repeatedly…and it’s made an impression on me.

Among the most common ghostly encounters people have told me over and over again are the following:

For what it’s worth, only one person has ever told me they’ve gotten a bad feeling from ghostly activity. Most people tell me they get the feeling a presence is there and just trying to let them know.

So where do you stand on ghosts? Do you believe? I get asked this question more than any other. And after all the spooky stories I’ve heard and all the consistencies among the stories, I have to say…I keep a very open mind! Leave a comment below and let me know your thoughts on ghosts. One lucky commenter will win a signed copy of THE GHOST CHRONICLES 1 or 2, your choice!

Also, I wanted to let you know about my latest upcoming event. If you’re interested in getting signed copies of my award-winning books…

December 1st, 8th, 15th 2018 All three Saturdays I’ll be signing THE GHOST CHRONICLES, Books 1 and 2, at the Angel of the Sea in Cape May, NJ during MAC’s Christmas Candlelight House Tours! The Angel of the Sea is the romantic bed and breakfast that graces the covers of both books in THE GHOST CHRONICLES series, and provided the inspiration for the story. Tickets for the tours can be purchased here: Christmas Candlelight House Tours   And you can respond to each of the events on Facebook here: Dec 15th, Dec 8th, Dec 1st 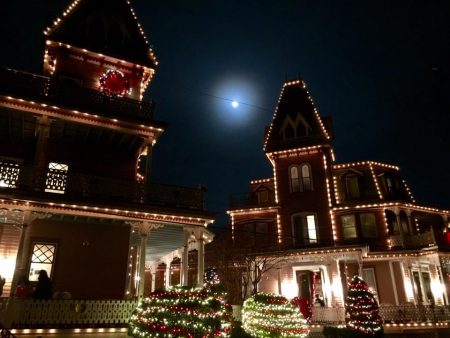 And while you’re there, don’t hesitate to visit the Angel of the Sea for a look around. Tell them Marlo sent you! The romantic bed and breakfast is beautiful, both during the day, and lit up at night 🙂