THE GHOST CHRONICLES SERIES
NOW AN AMAZON #1 BESTSELLER IN THE US, UK, CA, AND AU!
TWO GHOSTS FALLING IN LOVE IN THE AFTERLIFE. AN EPIC WAR BETWEEN GOOD AND EVIL. ONE UNFORGETTABLE GHOSTLY ADVENTURE.

Inspired by the legend of a haunting at the Angel of the Sea bed and breakfast in Cape May, NJ.

Praise for The Ghost Chronicles Series:

“[One] of the best indie YA books we have seen in the past year, from both self-publishers and small presses. – IPPY Magazine, May 2017 Issue

“I loved The Ghost Chronicles. Simply loved it. Billed as a young adult novel with crossover appeal for the adult crowd, this book certainly got the attention of this adult. Author Marlo Berliner has done a masterful job in creating a story and characters that her readers will care about, relate to, and continue to think about long after the final words are read. If that isn’t a hallmark of a great author, I’m not sure what is. Her scene setting skills are simply second to none, and the setting of the Angel of the Sea Inn bed and breakfast is a perfect place for this afterlife love story to take place. Any reader, young adult or not, who enjoys paranormal fiction, love stories, or just a great work of fiction should absolutely read The Ghost Chronicles. I highly recommend this book, and look forward to reading more from the extremely promising and talented new author, Marlo Berliner, as soon as I possibly can!” – Tracy A. Fischer for Readers’ Favorite, 5-stars

Author Marlo Berliner has penned a poignant tale that conjures a myriad of emotions. Young adult audiences will laugh and cry as they experience the afterlife through Michael’s eyes. – Literary Classics, 5-stars

Sarah’s character and the setting for The Ghost Chronicles was inspired by an actual place! You can read about that here:

The Angel of the Sea is an award-winning bed and breakfast in Cape May, NJ. This spectacular inn has been featured on several television programs and in magazines throughout the world. Most notably, it was chosen by Oprah Winfrey as one of the “Best Vacations in the World” and included in her television talk show. The Angel of the Sea is one of the most recognized Victorian structures in the United States. Legend has it that in the late 1960’s, a girl did fall to her death at the Angel of the Sea and did at one time, haunt the inn. The story of the girl has been included in several non-fiction books about ghosts in Cape May. Sarah’s character in THE GHOST CHRONICLES was inspired by this legend. You can learn more about the Angel of the Sea by visiting: http://www.angelofthesea.com/

You can also learn more about THE GHOST CHRONICLES series by watching this interview on an episode of the TV show, The Spark, which aired in September 2016 on PBS’s WHYY-Philadelphia TV station:

Or you can watch my interview which was streamed live on Facebook in July 2017. 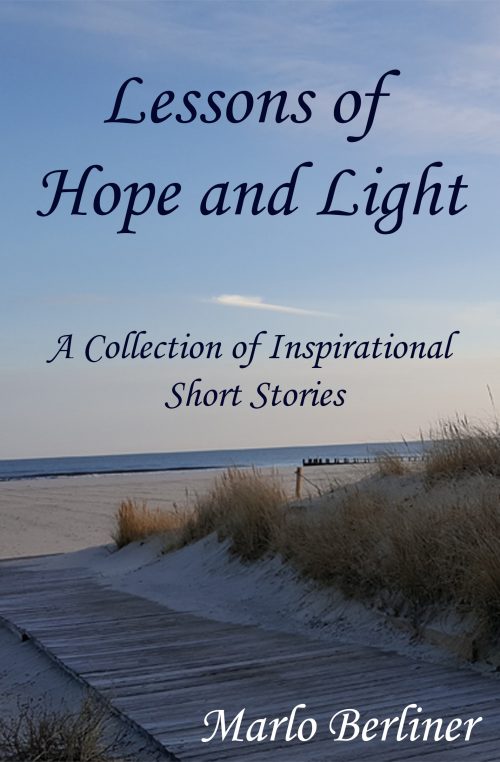 AN AMAZON #1 BESTSELLER IN THE US!

Lessons of Hope and Light is a thought-provoking collection of inspirational short stories by award-winning author, Marlo Berliner. These heartfelt, up-lifting stories and life lessons are meant to enhance faith and promote spiritual growth.
The collection includes three short stories – The Lucky One, The Gift, and The Journey. One of the stories, The Gift, was awarded an Honorable Mention in the 79th Annual Writer’s Digest Competition in the Mainstream/Literary Short Story Category. The Journey teaches five spiritual lessons in one short story.
As an added bonus, the collection also includes a sneak peek at the first chapter of Marlo’s award-winning, best-selling debut book, THE GHOST CHRONICLES.