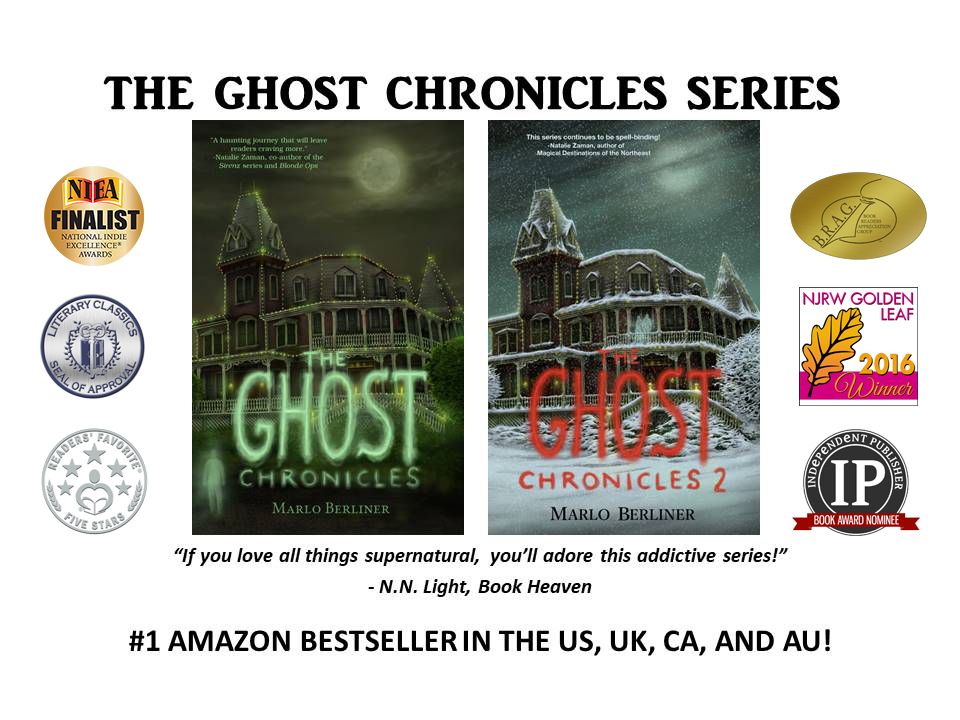 The best stories lie at the intersection of truth and imagination. The Ghost Chronicles series began this way, as well. I had my ‘eureka’ moment one day while sitting on the beach in the Outerbanks of North Carolina (for those of you who don’t know where that is, I urge you to find out and go visit). At the time, I was reading Harry Potter and the Chamber of Secrets. Chapter Eight, The Deathday Party, deals with ghosts and what it might be like to ‘live’ in the afterlife, so that provided the spark that ignited the fire to write The Ghost Chronicles. As a flood of ideas filled my head, I scribbled down a rough outline and the book quickly took shape.

The setting for most of the story was inspired by The Angel of the Sea, an award-winning bed and breakfast in Cape May, NJ that I visited several years ago and fell in love with. This spectacular inn has been featured on several television programs and in magazines throughout the world. Most notably, it was chosen by Oprah Winfrey as one of the “Best Vacations in the World” and included in her television talk show. The Angel of the Sea is one of the most recognized Victorian structures in the United States. Legend has it that in the late 1960’s, a girl did fall to her death at the Angel of the Sea and did at one time, haunt the inn. The story of the girl has been included in several non-fiction books about ghosts in Cape May. Sarah’s character in The Ghost Chronicles was inspired by this legend. You can learn more about The Angel of the Sea by visiting ANGEL OF THE SEA, CAPE MAY.

The Ghost Chronicles is a planned trilogy and the third book will be out in February of next year. If you’ve already read The Ghost Chronicles 1 & 2, I hope you’ll leave reviews everywhere. Doesn’t have to be a long review, just a line or two will do 🙂

P.S. Here are some of the previous reviews for the series:

“I loved The Ghost Chronicles. Simply loved it. Billed as a young adult novel with crossover appeal for the adult crowd, this book certainly got the attention of this adult…I highly recommend this book, and look forward to reading more from the extremely promising and talented new author, Marlo Berliner, as soon as I possibly can!” – Tracy A. Fischer for Readers’ Favorite, 5-stars

“…a most beguiling, intriguing, mystery-filled adventure. With a literary nod to the movie Ghost…and a certain resonance with the Odd Thomas series by the master of the genre, Dean Koontz, the story does remind us frequently that it is intended for Young Adults. And yet, the excellent plotting, precise editing, and well-projected development of storyline all guarantee that the writing is also perfectly suitable for an Old Adult.” – Joel R. Dennstedt for Readers’ Favorite, 5-stars

“This is an original and thought-provoking story that will keep readers wondering and looking forward to the next book in the series. It’s highly recommended.” – Jack Magnus for Readers’ Favorite, 5-stars

“For teens and adults alike, The Ghost Chronicles is an unusually thoughtful and mature take on supernatural romance that deserves attention for its efforts to break away from convention, all for the better. For curious readers old and new to the genre, The Ghost Chronicles is sure to set your mind ablaze, and puts “life” back into the “afterlife.” “ – James Grimsby for Self-Publishing Review, 4.5-stars

“I loved this book right from the beginning… I loved following Michael on his journey and I could feel the emotions behind the entire story. The sadness that his mother felt; Michael’s frustration and anger. Empathy for Melissa. I am not one who typically reads books more than once, but this one will remain on my Kindle to read again in the future. That doesn’t happen often, but when I find a book like this, it’s a treasure to hang on to!” – Leila, Life as Leels, 5 stars

I was pulled right into this story… I will definitely be reading the second book! – Stephanie’s Book Reviews, 5 stars

“Everything in this book seems to be written with great thought and care. Nothing seemed to be rushed or ignored…Paranormal that makes sense? Too good. Learning how to be dead? Yes, please!” –Enthralling Dimple

“This is definitely one to add to your (probably neverending) TBR. With exciting characters, a heartbreaking narrative, and a story that will leave you bursting with questions in anticipation for the next book, Marlo is one to watch.” – Between The Pages, 4 stars

“This series continues to be spell-binding!” – Natalie Zaman, Author of Magical Destinations of the Northeast

“There is so much for readers in this book and the author makes it feel so real that readers find themselves believing in the mysterious world she creates.” – Divine Zape, Reader’s Favorite, 5-stars

“This episode of the Ghost Chronicles was action packed.” – Stephanie’s Book Reviews

“If you love all things supernatural, you’ll adore this addictive series. A must read and highly recommend!” – N.N. Light