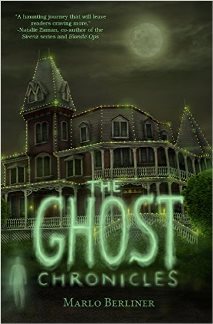 The setting for most of the story was inspired by The Angel of the Sea, an award-winning bed and breakfast in Cape May, NJ that I visited several years ago and fell in love with. This spectacular inn has been featured on several television programs and in magazines throughout the world. Most notably, it was chosen by Oprah Winfrey as one of the “Best Vacations in the World” and included in her television talk show. The Angel of the Sea is one of the most recognized Victorian structures in the United States. Legend has it that in the late 1960’s, a girl did fall to her death at the Angel of the Sea and did at one time, haunt the inn. The story of the girl has been included in several non-fiction books about ghosts in Cape May. Sarah’s character in The Ghost Chronicles was inspired by this legend. You can learn more about The Angel of the Sea by visiting their website http://www.angelofthesea.com/.

One of my favorite scenes in the book is when Michael and Sarah are lying side by side on the bare wooden floor of the attic at The Angel of the Sea, listening to the rain tapping out a spastic yet soothing rhythm on the old gabled roof above. It’s a romantic scene that I wanted to be reminiscent of the romantic attic scene in Mystic Pizza, a 1988 coming-of-age movie starring a young Julia Roberts. One of these days I’d love to see my attic scene from The Ghost Chronicles play out on the silver screen. (If you’re going to dream, dream big I always say.)

As it happens, I’m currently running a Goodreads giveaway of The Ghost Chronicles! Win one of three signed copies!